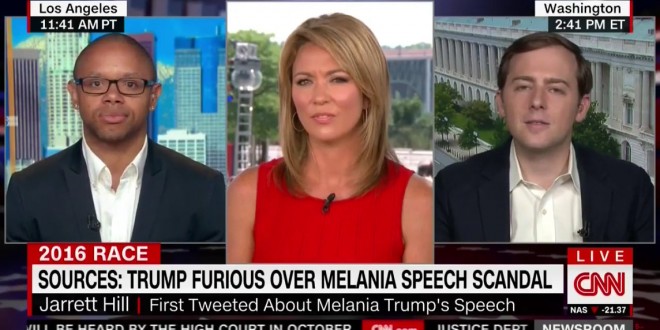 Adding extra deliciousness to an already entertaining plagiarism scandal is that journalist Jarrett Hill, who first picked up on it, belongs to two of the GOP’s most-reviled minorities. Via the New York Times:

Mr. Hill, a television journalist who was recently laid off, said in an interview that one of Ms. Trump’s lines — the words “strength of your dreams” — caught his attention as he was watching on his computer from a Starbucks in Los Angeles, juggling Facebook chats and browsing Twitter.

“It kind of made me pause for a minute,” Mr. Hill said. “I remembered that line from Michelle Obama’s speech.”

Mr. Hill, 31, found the clip of Mrs. Obama’s speech online and noticed that parts of the two speeches sounded the same. He then realized that a larger portion appeared to have been borrowed as he continued to examine both.

“I thought, ‘That’s legit plagiarism,’ ” said Mr. Hill, who described himself as a supporter of President Obama. “‘Someone took this piece and plugged in their own information.’”

Hill appeared on CNN this afternoon to defend himself from wingnut claims that he’s a “paid plant from the Clinton campaign.”