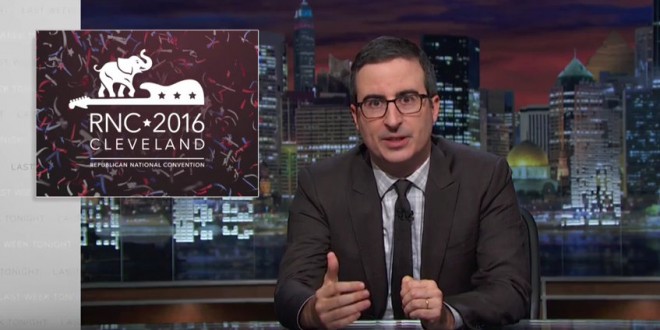 Putting his own spin on what just happened in Cleveland, Oliver opened by calling it a “3D IMAX (Expletive) Dumpster Fire.” And then the show did one of its trademark extended segments on the Republican convention, which was exactly the thing every “LWT” fan wanted to see.

You’ll probably see headlines for it Monday like, “Watch John Oliver Eviscerate the RNC” and “You Won’t Believe John Oliver’s Vicious Takedown of Donald Trump.” Because in Web headline writing, hyperbole means never having to say you didn’t get enough clicks.

But before getting to the RNC, Oliver had a few words to offer about more recent news, Hillary Clinton’s pick of Sen. Tim Kaine to be her Democratic vice-presidential running mate.

“He’s a white gym sock pulled all the way up,” Oliver said, amid a barrage of euphemisms for “boring.”

The veep pick was to be Clinton’s gift, he said: “Everyone was so excited. Was it a puppy? A PlayStation? Elizabeth Warren? Well, no, it turned out to be a rice cooker. A plain white machine that cooks plain white rice.”