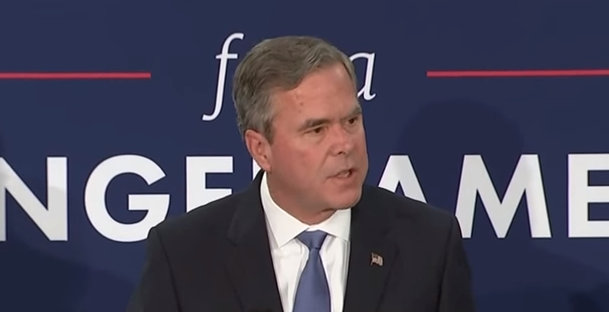 In an opinion column published by the Washington Post, yesterday Jeb Bush blamed President Obama for the Republican Party’s relentless campaign to thwart the civil rights of LGBT Americans. From his piece:

While he has no doubt tapped into the anxiety so prevalent in the United States today, I do not believe Donald Trump reflects the principles or inclusive legacy of the Republican Party. And I sincerely hope he doesn’t represent its future. As much as I reject Donald Trump as our party leader, he did not create the political culture of the United States on his own.

Eight years of the divisive tactics of President Obama and his allies have undermined Americans’ faith in politics and government to accomplish anything constructive. The president has wielded his power — while often exceeding his authority — to punish his opponents, legislate from the White House and turn agency rulemaking into a weapon for liberal dogma.

In turn, a few in the Republican Party responded by trying to out-polarize the president, making us seem anti-immigrant, anti-women, anti-science, anti-gay, anti-worker and anti-common-sense. Unfortunately, the understandable anger and fear haven’t given rise to a resurgence of purpose in politics or renewed a debate in our party about how Republicans win back the White House with the power of our ideas.