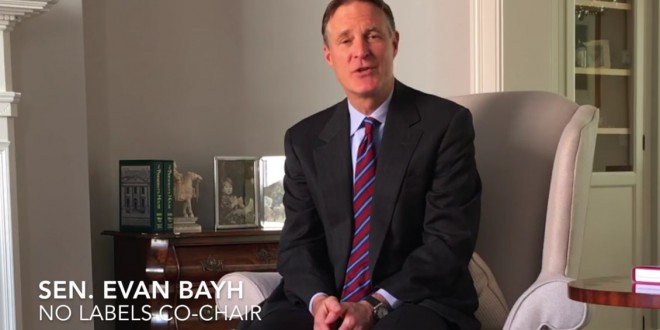 Whoa. The odds of flipping the Senate just got a big boost. The Hill reports:

Former Democratic Sen. Evan Bayh is jumping into the Indiana Senate race, a move that upends the race for the majority in 2016.

The former senator will announce his plan to run for Senate while the party’s Democratic nominee, former Rep. Barron Hill, steps aside, a source familiar with the plan confirmed to The Hill.

Hill officially announced his withdrawal Monday morning in an email to supporters that did not mention Bayh. It only specifies that he announced the decision to the Indiana Democratic Party, which will now “undertake a process to fill the vacancy with a nominee who will win in November.”

I have never run away from tough decisions or tough fights. But, I am a pragmatic person who will always put my country and my state first. I am also a proud Democrat who wants to see an Indiana Democrat fighting for Hoosier families alongside Senator Joe Donnelly in the U.S. Senate. And, I want to do everything in my power to ensure a U.S. Senate that will govern responsibly.

That is why, after consulting with my family, my staff and party leaders, I am withdrawing from the U.S. Senate race and removing my name from the November ballot.

While our campaign had been making great progress and building momentum all over Indiana, it is simply not enough to fight back against the slew of out-of-state, special interest and dark money that is certain to come our way between now and November.

Democrats have a very real chance at winning this Senate seat, especially with a strong nominee who has the money, name identification and resources to win. I do not want to stand in the way of Democrats winning Indiana and the U.S. Senate. That would not be fair to my party or my state. And, the stakes are far too high in this election not to put my country above my own political ambitions.

Evan Bayh was first elected to the Senate in 1998. In 2010 he shocked many when he dropped his bid for a third term too late for another Democrat to run in the primary. That election was won by then-former and now current Sen. Dan Coats. Coats is the only sitting member of the Senate to be reelected after having retired. Bayh may now succeed him in holding that distinction.

RELATED: Bayh’s father, famed liberal Birch Bayh, represented Indiana in the Senate from 1962 until he was unseated by Dan Quayle in 1980.