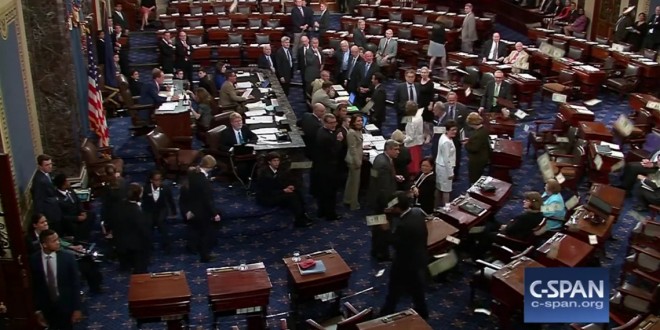 Dollar bills rained onto the Senate floor Wednesday as protesters called on senators to reject a bill relating to labeling products with genetically modified organisms, or GMOs.

Alexis Baden-Mayer, political director ofthe Organic Consumers Association, and Adam Eidinger, a local activist and founder of “Occupy Monsanto,”dropped more than $2,000 worth of dollar bills onto the floor around 4 p.m. to raise attention about large corporations’ influence on the legislation.

“The Senate is being bribed,” they shouted. “This is not what democracy looks like.”

The pair, along with a third protester, were promptly escorted out of the Senate chamber by security.

Previous Trump Shrugs Off Veepstake Bailers: I’ve Got Ten Names And Some Of Them You Don’t Know About Yet
Next Bernie Sanders: House Democrats Booed Me Today Because We Look At The World Differently [VIDEO]