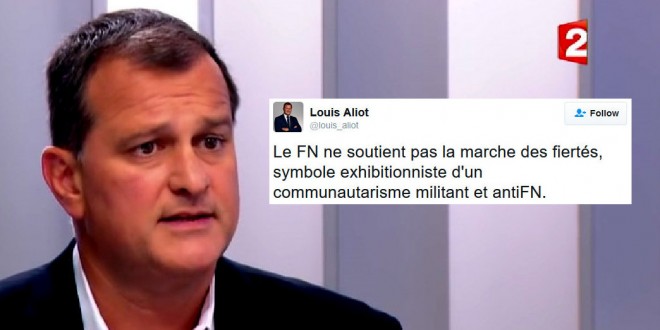 Louis Aliot, vice president of France’s neo-Nazi National Front, issued a tweet this weekend which denounced the Paris Pride Parade as “exhibitionist” and “militant.” Aliot is the domestic partner of National Front president and presidential candidate Marine Le Pen, who is the daughter of party founder Jean-Marie Le Pen, who has been convicted multiple times of inciting racial hatred and denying the Holocaust. From the Telegraph:

Ms Le Pen herself remained silent. One of her deputies, Florian Philippot, is openly gay after being outed by a gossip magazine two years ago. She has tried to court the support of gay voters and was conspicuously absent from protests against the legalisation of same-sex marriage in 2013, instead advocating civil partnerships for gay couples.

Mr Philippot also kept his opinion to himself, although in the past he has insisted that “the FN is not gay friendly, (but) it is not the opposite either. It is French friendly.”

His position is rejected by Ms Le Pen’s father, the FN’s founder, Jean-Marie Le Pen, who has repeatedly said he views homosexuality as “a biological and social anomaly”.

Mr Le Pen, 88, was expelled from the party last year after an anti-Semitic outburst. Younger FN members may not share his disapproval of homosexuality, but the leader of the party’s youth wing, Gaëtan Dussausaye, said it was “out of the question… to support the Gay Pride march.”

Marine Le Pen may have been personally “absent” from France’s violent anti-gay demonstrations, but as I reported multiple times that year, many members of the National Front were not. See below. Britain’s Brexit vote has reportedly boosted her chances of being elected president next year.

PREVIOUSLY ON JMG: The National Front is a backer of the anti-gay Manif Pour Tous and supported its numerous, vicious and often violent rallies, as did US hate group leaders Brian Brown and Tony Perkins. In 2014 founder Jean-Marie Le Pen  “joked” that his critics, who include Madonna, will be in the next “batch” headed for the gas chambers. He has also “joked” that ebola is the “solution” to Europe’s immigration problems. In 2013 Marine Le Pen praised the man who committed suicide at Notre Dame Cathedral in protest of same-sex marriage. In 2014 Jean-Marie Le Pen’s granddaughter, 24 year-old Marion Maréchal-Le Pen, led a massive anti-gay march through the streets of Paris. Also that year the youth leader of the National Front called for France to institute anti-gay laws similar to those in Russia.