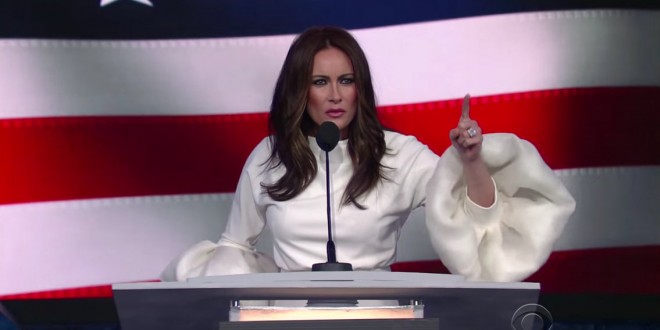 This put me on the floor last night. The Daily Beast sets up the clip:

Stephen Colbert opened his second live show of the week by addressing the big controversy to come out of the Republican National Convention’s first night. As Colbert soberly told his viewers: Melania Trump has been accused of plagiarizing portions of a speech First Lady Michelle Obama gave at the 2008 Democratic National Convention.

Fortunately, the host revealed that he had secured the “first exclusive appearance” by Melania Trump so she could explain what happened. With that, out walked a woman in a white dress who looked and sounded remarkably like Donald Trump’s third wife—but was actually Tony Award-winning actress Laura Benanti.