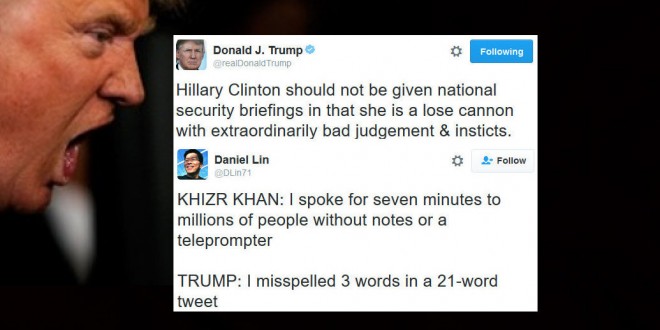 Unrelated to the above nonsense, Donald Trump is bitching about the “rigged” presidential debate schedule, which was announced long, long before anybody seriously considered the prospect of him becoming the nominee. The Hill reports:

This year’s general election is set to include three presidential and one vice presidential debates, all announced on Sept. 23 of last year by the bipartisan Commission on Presidential Debates.

Two of the presidential debates do indeed coincide with NFL games: The first, on Monday, Sept. 26, falls the same evening as a matchup between the Atlanta Falcons and New Orleans Saints. And the second, set for Sunday, Oct. 9, will air opposite a game between the New York Giants and Green Bay Packers.

As usual, Hillary & the Dems are trying to rig the debates so 2 are up against major NFL games. Same as last time w/ Bernie. Unacceptable!

Previous Spox: Trump Won’t Meet With Father Of Slain Soldier Because He Doesn’t Like To Make Headlines [VIDEO]
Next CONVENTION BOUNCE: Hillary +15 In New National Poll