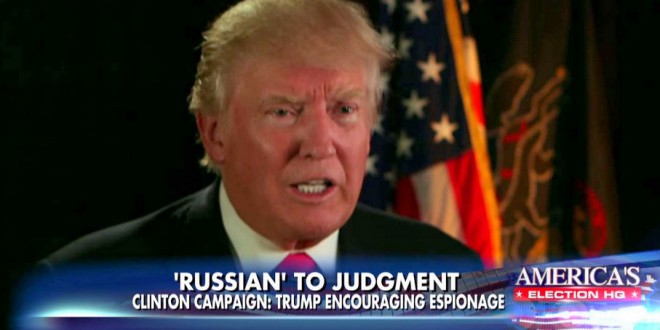 Donald Trump: I Was Only Being Sarcastic When I Invited Russia To Spy On Hillary Clinton [VIDEO]

Donald Trump says he was only kidding when he appeared to encourage Russian intelligence agencies to find Hillary Clinton’s thousands of deleted emails. “Of course I’m being sarcastic,” Trump said in an interview on Fox News that aired Thursday morning. “You have 33,000 emails deleted, and the real problem is what was said on the emails from the Democratic National Convention.”

A US official said Thursday there is “little doubt” Russia was behind the DNC hack, prompting some to suggest that Moscow is trying to tilt the election in Trump’s favor. In an interview on Tuesday, President Barack Obama said it is “possible” that Russian President Vladimir Putin is trying to bolster Trump’s chances.

Previous Stephen Colbert’s One Question For Donald Trump: What Does Putin’s Dick Taste Like? [VIDEO]
Next RUMOR: Megyn Kelly Might Jump From Fox To CNN