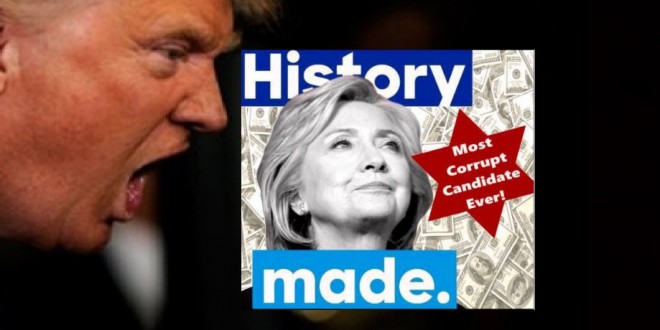 Donald Trump is under fire this morning for a tweet echoing the visual language of many of his most extreme, anti-Semitic supporters. Trump tweeted an image saying that Hillary Clinton is the most corrupt politician ever, which is accompanied by the Star of David and hundred dollar bills. Within moments, many on Twitter expressed their shock and outrage that Trump would send out a graphic that seems to embrace the anti-Jewish beliefs of many on the alt-right.

Many critics, including political commentators and journalists, were quick to point out the shape of the Star of David, questioning Trump’s motive for tweeting such an image. Trump later tweeted a new image that featured the same text over a red circle instead of a star. The original tweet and image hasn’t been deleted.

Republican strategist and CNN contributor Ana Navarro brought up the fact that Trump often makes appeals to the Jewish community by saying he has Jewish grandchildren. His daughter, Ivanka Trump, converted to Judaism before marrying her husband, Jared Kushner.

“‘I have Jewish grandchildren’ is the new, ‘Some of my best-friends are black’ defense to an offensive comment,” she tweeted in response to the image.

Some of my mentions right now. Trump’s Star of David anti-Hillary tweet seems to have resonated with some. pic.twitter.com/FhOJR1gDQa