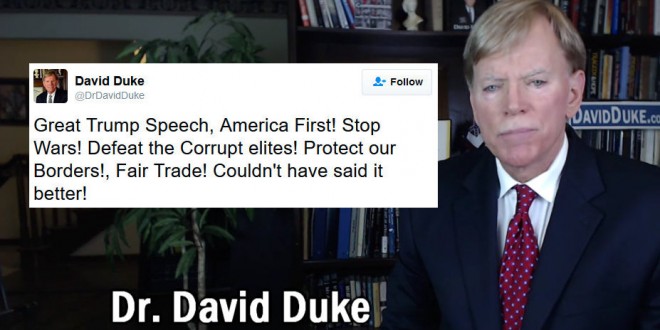 David Duke Announces Run For US Senate: I Will Defend The Heritage Of European-Americans [VIDEO]

Exactly 12 hours after Trump accepts the nomination, Tony Perkins’ BFF throws his hood into the ring. This is NOT a coincidence. The Hill reports:

Former Ku Klux Klan leader David Duke is launching a run for a U.S. Senate seat in Louisiana, he announced Friday. “After the great outpouring of overwhelming support, I’m proud to announce my candidacy for United States Senate,” Duke said in a video on his YouTube page.

“I believe in equal rights for all and respect for all Americans. However, what makes me different is I also demand respect for the rights and the heritage of European Americans,” he added.

“I passed the only bill in American forbidding affirmative action programs that racially discriminated against the best qualified.” Duke unsuccessfully ran for the Senate, House and governor of Louisiana during the 1990s.

Previous Disloyal Ivanka Sells Her Convention Dress…At Macy’s
Next Bryan Fischer Has The Peter Thiel Sadz: Our Deviant Homosexual Enemies Are Now Within The Gates