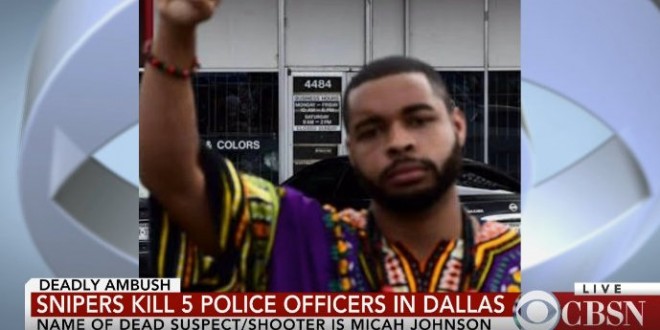 From the Dallas CBS affiliate:

Dallas Police Chief David Brown confirmed the death of one gunman, later identified by CBS News as 25-year old Micah Xavier Johnson of Mesquite, the suspect that police cornered in a parking garage at El Centro College in the downtown area immediately following the shooting.

According to Brown, police cornered Micah Johnson and negotiated with him for several hours. When talks broke down – they exchanged gunfire with the man. At that point, police sent in a remote vehicle and detonated a bomb – ultimately killing him.

“We saw no other option but to use our bomb robot and place a device on its extension for it to detonate where the suspect was. Other options would have exposed our officers to great danger” said Brown.

Sources told the Los Angeles Times that Johnson has no ties to terror groups and no known criminal history. He has lived in the Dallas area and has family members living in Mesquite, Texas, east of Dallas, the newspaper reports, citing federal law enforcement sources.

A black SUV was found at the scene registered to Delphene Johnson, who is Micah Johnson’s mother according to Facebook posts and public records, NBC Dallas-Fort Worth reports. Live helicopter video from the news station showed police at her home in Mesquite.

The suspect told police he was a U.S. Army Veteran, CBS News reports. He told police negotiators the “end is coming” and said he wanted to “kill more” officers, according to Brown.