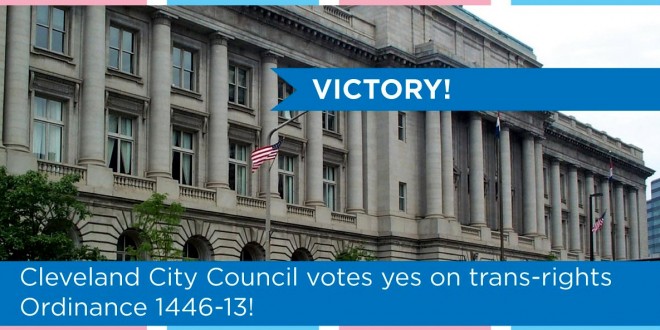 The measure was introduced in 2013 as part of a package of ordinances that update the city’s existing anti-discrimination laws to include the transgender community.

The legislation removes a passage from the existing nondiscrimination ordinance that allowed for owners of private business with “public accommodations” to discriminate based on a person’s gender identity or expression and dictate which bathroom a person should use, “provided reasonable access to adequate facilities is available.”

“While national Republican leaders are doing everything possible to relegate LGBTQ people to second-class citizens, the Cleveland City Council is standing up and sending the world a different message — that Cleveland is a welcoming city and won’t tolerate discrimination against transgender people,” said HRC Senior Vice President of Policy and Political Affairs JoDee Winterhof. “We commend City Council members for setting a pro-equality example for other cities and states by soundly rejecting the dangerous, fear-mongering rhetoric many anti-equality activists are peddling across the country.”

“This action by the City Council delivers on the promise of the Gay Games,” said Alana Jochum, Executive Director of Equality Ohio. “Cleveland is now a world class city with laws that foster a culture of inclusion. When the world is watching Cleveland on television, whether it’s the NBA Finals or the Republican National Convention, they’re seeing a city that is welcoming of LGBTQ people.”

Cleveland now joins 19 states and more than 100 cities that have explicit non-discrimination protections on the basis of sexual orientation and gender identity in public accommodations, housing and employment. Columbus and Cincinnati also have similar protections in place.