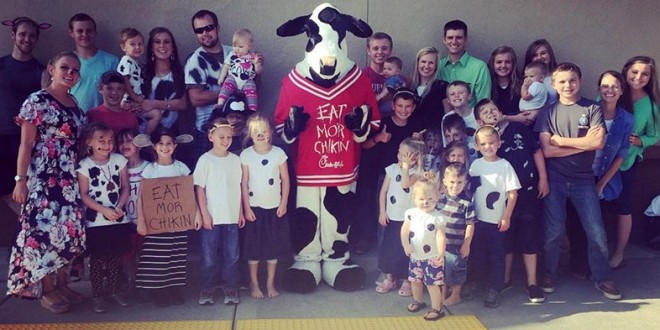 Josh Duggar resurfaced to get some free grub on Tuesday, and he was joined by a large group of family and friends. Josh hasn’t appeared in any of his family’s social media photos since returning home from a six-month stay at a Christian treatment facility, but the former 19 Kids and Counting star can be seen showing off a hastily-made cow costume in an Instagram photo snapped by a friend of the Duggar family.

As Fox News reports, yesterday was Cow Appreciation Day at the fast food chain, meaning that customers who dressed up like cows could score free entrees. Josh and Anna Duggar’s cow costumes seemingly consist of nothing more than white T-shirts with black splotches painted on them. It’s no secret that the Duggars are fans of Chick-fil-A. As E! News reports, Jill Duggar loves her Chick-fil-A so much that she believes that the restaurant will exist in heaven.

Last year the Duggar clan was roasted on social media after demanding that a Krispy Kreme outlet hand over 14 dozen free donuts as part of the chain’s “Talk Like A Pirate” promotion. The Duggars are also well-known for exploiting “kids eat free” promotions at local restaurants. For restaurants that limit the free meals to two children per adult, the Duggars reportedly claim that the older siblings are adults. (Tipped by JMG reader Scott)