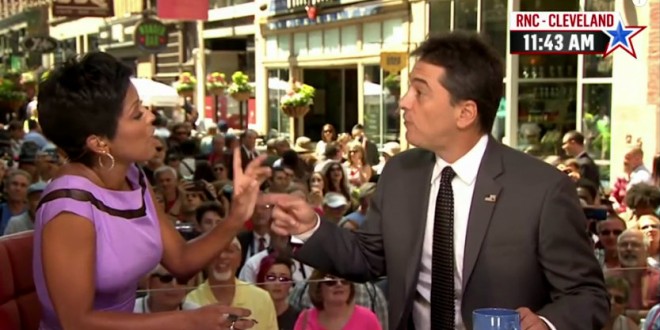 Whoa! The Week recaps the shout-fest:

MSNBC anchor Tamron Hall was not putting up with any excuses from Trump-supporting actor Scott Baio when she confronted him about sharing a controversial meme showing Hillary Clinton in front of what appears to be “the C-word.”

Over the course of four minutes, Hall repeatedly skewered Baio for sharing the meme, demanding to know, “Did you think about that in church, when you tweeted it out?”

Baio, who is best known for his role as Chachi on Happy Days, attempted a desperate backtrack. “I offered it without commentary, that was just put up,” he said. “I just put it up there.”

“Yeah, but you know what it meant when you tweeted it out,” Hall said. She then pivoted to another tweet that showed an unflattering picture of Michelle Obama with the text “Wow. [Obama] wakes up to this every morning.”

Things get started just before the 3:30 mark.