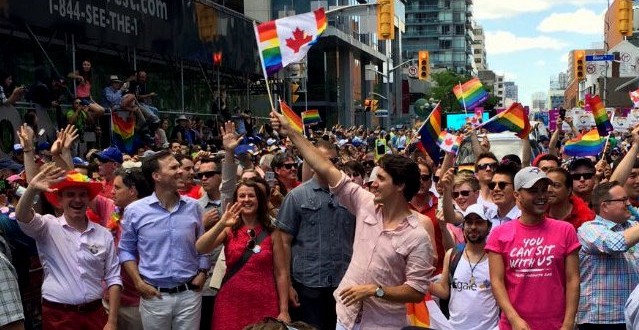 The Toronto Pride Parade just kicked off with Justin Trudeau making Canadian history as the first sitting Prime Minister to march in such an event. From the Ottawa Citizen:

Other notable politicians marching include Ontario’s premier, Kathleen Wynne, and the mayor of Toronto, John Tory.

Before the parade, Trudeau attended an outdoor church service in the heart of the city’s gay village where he sang along to Lady Gaga’s “Born This Way.”

The parade wraps up a month of Pride festivities in Toronto, which saw entertainment heavyweights like George Takei and Lindsay Lohan participate.

But the month has also been shadowed with grief. In early June, 49 people — who were predominantly LGBTQ people of colour — were killed in a mass-shooting at the Pulse nightclub in Orlando, Fla.

The month’s celebrations were dedicated to the victims of the massacre, and there will be a moment of silence during today’s parade to remember them.

Here he is! @JustinTrudeau #PrideTO pic.twitter.com/cKH7Ye3QDh

And just like that history is made! @JustinTrudeau becomes first prime minister to March at pride. –@Radio_Brent pic.twitter.com/T6c61fWg48

My city. My pride. My Prime Minister @JustinTrudeau! #PrideMinister pic.twitter.com/XzHPmpRr8i