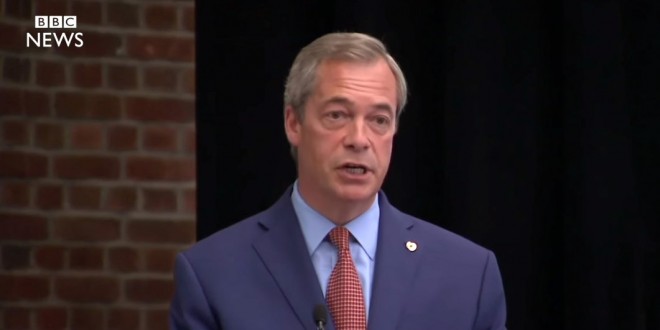 BRITAIN: Brexit Advocate Resigns As Head Of Right Wing Party Now That He “Has His Country Back”

He’s leaving the mess for somebody else to clean up. The BBC reports:

Nigel Farage says he is standing down as leader of the UK Independence Party. Mr Farage said his “political ambition has been achieved” with the UK having voted to leave the EU.

He said the party was in a “pretty good place” and said he would not change his mind about quitting as he did after the 2015 general election. Leading UKIP was “tough at times” but “all worth it” said Mr Farage, who is also an MEP. He added that the UK needed a “Brexit prime minister”.

Mr Farage said the party would campaign against “backsliding” on the UK’s exit from the EU, saying he planned to see out his term in the European Parliament – describing his party as “the turkeys that voted for Christmas”.

He said his party’s “greatest potential” lay in attracting Labour voters, adding that he would not be backing any particular candidate to replace him.

“I now feel that I’ve done my bit, that I couldn’t possibly achieve more,” Farage told reporters in London on Monday. “It’s right that I should now stand aside as leader. What I said during the referendum campaign is I want my country back. What I’m saying today is I want my life back. And it begins right now.”

The referendum result marked a personal success for Farage, who in the early 1990s helped to found a party later described by Cameron as “a bunch of fruitcakes, loonies, and closet racists.” That represented a misjudgment as the prime minister found himself having to turn more euroskeptic to maintain his party’s appeal to voters, ultimately calling the referendum on EU membership which sank him.