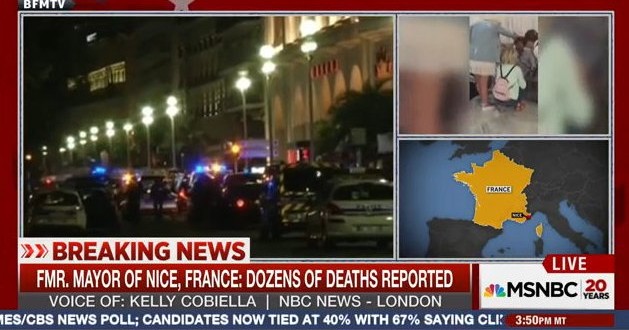 A truck plowed into a group of pedestrians in Nice, France, Thursday night as people celebrated Bastille Day, authorities said. The mayor of Nice, Christian Estrosi, said on Twitter there appeared to be dozens of deaths.

The local Nice Martin newspaper reported that a car ran into a crowd watching a fireworks display. Photos and video on social media appeared to show crowds running from the scene, and people several injured on the ground.

Police told NBC they were aware of an incident but were still investigating. Following the incident, Nice Mayor Christian Estrosi tweeted in french, “Dear nice, the driver of a truck appears to have made dozens of deaths. Stay for the moment to your home. More info to come.”