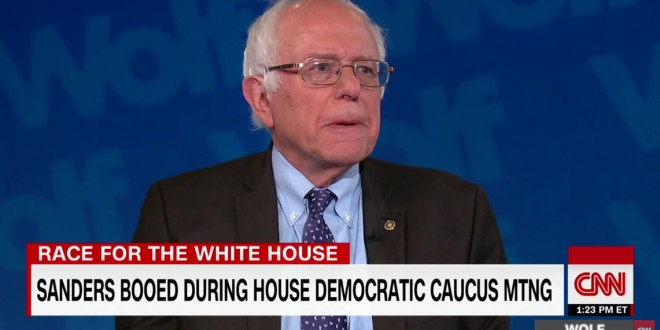 Bernie Sanders: House Democrats Booed Me Today Because We Look At The World Differently [VIDEO]

Sen. Bernie Sanders (I-Vt.) said the reason that House Democrats booed him at a closed-door meeting Wednesday morning boils down to the fact that they simply “look at the world a little bit differently.”

Though Sanders said that reports of the incident were somewhat exaggerated, he did acknowledge “differences of opinion.”

“What I’m trying to do and the reason I ran for president is to help transform this country. To deal with income and wealth inequality, a declining middle class, the fact that so many of the young people are leaving school deeply in debt,” Sanders told CNN’s Wolf Blitzer later Wednesday.

House Democrats allegedly booed Sanders for his longstanding refusal to endorse Hillary Clinton in the Democratic presidential race, despite the fact that she’s won enough delegates to clinch the nomination.