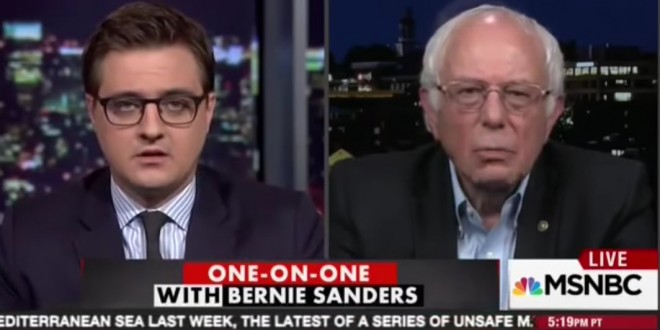 Bernie “Isn’t There Yet” On Endorsing Hillary [VIDEO]

While Vice President Joe Biden on Thursday recounted a conversation with Bernie Sanders in which he said the Vermont senator would endorse Hillary Clinton, Sanders himself declared later in the evening that he is “not there at this moment.”

“Oh, I’ve talked to Bernie, Bernie’s going to endorse her, this is going to work out,” the vice president told NPR’s Weekend Edition in an interview Thursday. “The Democrats are coalescing even before this occurs.” That conversation, Sanders told MSNBC’s Chris Hayes, happened “I think it was three weeks ago.”

“Look, on that issue, we are trying to work with Secretary Clinton’s campaign on areas that we can agree on, where the people who supported me, we got about 12, 13 million votes, and what they want to see, whether it is on … moving toward making public colleges and universities tuition-free, or moving aggressively in terms of health care and moving toward a universal health care system, significantly expanding primary health care, those are the issues that we’re working with Secretary Clinton on now and I hope we can be successful,” Sanders explained.