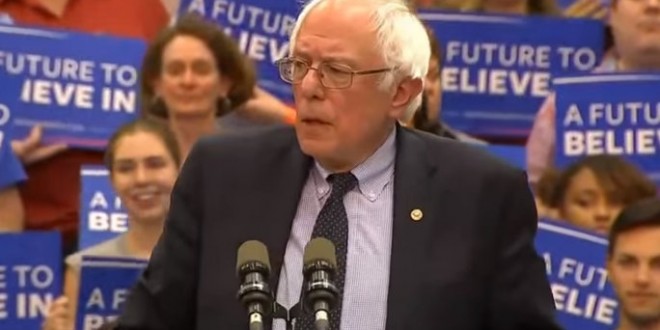 A draft version of the 2016 Democratic National Committee platform has been released with several new items pushed strongly by Bernie Sanders. The Hill reports:

The platform explicitly calls for a $15 minimum wage, a position long espoused by Sanders. “Democrats believe that the current minimum wage is a starvation wage and must be increased to a living wage,” the text reads.

“We believe that Americans should earn at least $15 an hour and have the right to form or join a union. We applaud the approaches taken by states like New York and California. We should raise and index the minimum wage, give all Americans the ability to join a union regardless of where they work, and create new ways for workers to have power in the economy.”

Sanders also campaigned on protecting Social Security, which is reflected in the platform’s call to “expand” the program. His push to end the death penalty and nix private immigration detention centers also appear in the draft.

The platform includes a vigorous defense of the Postal Service, something that was not mentioned in the 2012 platform. The section calls for, among other things, post offices to allow simple banking services like cashing paychecks — which is something Sanders fought for.

The platform declares that the death penalty “has proven to be a cruel and unusual form of punishment” that “has no place in the United States of America.” Hillary Clinton has backed the “very limited use” of the death penalty, primarily in cases that involve terrorism.

Several other major Sanders talking points, however, got no mention in the platform. The 2016 version contains no call for a ban on fracking or for a carbon tax. Nor does it repudiate the Trans-Pacific Partnership.