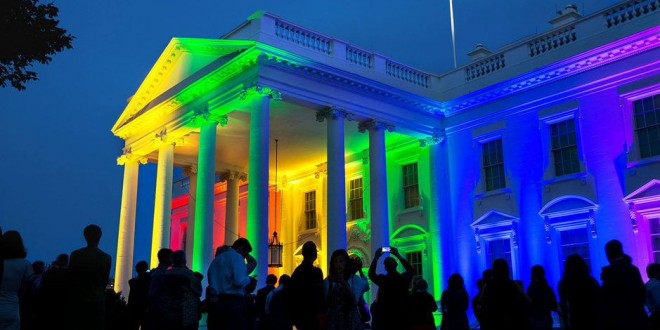 The White House today issued a lengthy recounting of the many, many advances in LGBT rights seen during the Obama administration. The “fact sheet” – which I’ve posted in its entirety below – serves both as a very well-earned bragging point and as a stark reminder of how tenuous many of these advances remain with the specter of a Republican administration looming before us. Read it all, please.

“We are big and vast and diverse; a nation of people with different backgrounds and beliefs, different experiences and stories, but bound by our shared ideal that no matter who you are or what you look like, how you started off, or how and who you love, America is a place where you can write your own destiny.” President Obama, June 26, 2015

Since taking office, President Obama and his Administration have made historic strides to expand opportunities and advance equality and justice for all Americans, including Lesbian, Gay, Bisexual, and Transgender (LGBT) Americans. From major legislative achievements to historic court victories to important policy changes, the President has fought to promote the equal rights of all Americans — no matter who they are or who they love. That commitment to leveling the playing field and ensuring equal protection under the law is the bedrock principle this nation was founded on and has guided the President’s actions in support of all Americans. And the progress the Administration has made mirrors the changing views of the American people, who recognize that fairness and justice demand equality for all, including LGBT Americans.

The Obama Administration’s record on social progress and equality includes:

· Overcoming years of partisan gridlock, the President worked with Congress to pass and sign into law the Matthew Shepard and James Byrd, Jr. Hate Crimes Prevention Act into law in October 2009, which extends the coverage of Federal hate crimes law to include attacks based on the victim’s actual or perceived sexual orientation or gender identity.

· The U.S. Department of Health and Human Services (HHS) collaborated with five other federal departments to establish a federal task force on bullying. One of the results was the creation of the website – www.StopBullying.gov. The site includes resources and assistance for LGBT youth, including examples of community groups that offer support and options to seek counseling. As part of the first-ever White House Conference on Bullying Prevention, the task force also funded a video called “It Gets Better” to address LGBT youth who have been bullied and are at risk of depression and suicide.

· The U.S. Department of Education hosted five summits on strategies for protecting students, including LGBT students, from bullying and harassment. These events included an LGBT Youth Summit in 2011 and a meeting with transgender students in June 2015, with a sixth summit scheduled for August 2016.

· In March 2010, the Affordable Care Act was signed into law by President Obama and ensures that Americans have secure, stable, and affordable insurance. Insurance companies are no longer able to discriminate against anyone due to a pre-existing condition, and because of the law, insurers can no longer turn someone away just because he or she is lesbian, gay, bisexual, or transgender.

· The federal website, HealthCare.gov, designed to help all consumers find the health insurance best suited to their needs, makes it easy to locate health insurers that cover domestic partners.

· The Affordable Care Act also makes it easier for people living with HIV and AIDS to obtain Medicaid and private health insurance and overcome barriers to care from qualified providers.

· President Obama developed and released the first comprehensive National HIV/AIDS Strategy for the United States in 2010, updated it through 2020, and is implementing it to address the disparities faced especially by gay and bisexual men of all races and ethnicities and transgender women of color.

· The President has supported legislative efforts to ban the use of so-called “conversion therapy” against minors and released a Substance Abuse and Mental Health Services Administration (SAMHSA) study condemning the practice. This report, which was developed in collaboration with the American Psychological Association and a panel of behavioral health experts, is the first federal in-depth review of conversion therapy. As SAMHSA reported, variations in sexual orientation, gender identity, and gender expression are normal. Conversion therapy is not effective, reinforces harmful gender stereotypes, and is not an appropriate mental health treatment.

· HHS funded the Services and Advocacy for LGBT Elders (SAGE) to establish the first national resource center for older LGBT individuals. This center supports communities across the country as they aim to serve the estimated 1.5 to 4 million LGBT individuals who are 60 and older. This center provides information, assistance and resources at the state and community levels.

· HHS now requires all hospitals receiving Medicare or Medicaid funds – just about every hospital in America – to allow visitation rights for LGBT patients. The President also directed HHS to ensure that medical decision-making rights of LGBT patients are respected.

· The President signed bipartisan legislation to repeal Don’t Ask Don’t Tell on December 22, 2010, allowing gay, lesbian, and bisexual Americans to serve openly in the Armed Forces without fear of being dismissed from service because of who they are and who they love, putting in motion the end of a discriminatory policy that ran counter to American values.

· In February 2011, the President and Attorney General announced that the Department of Justice would no longer defend the Defense of Marriage Act’s provision defining marriage as only between a man and woman, leading to the Supreme Court’s landmark decisions holding the Act unconstitutional.

· After the United States v. Windsor decision, in which the Supreme Court struck down Section 3 of the Defense of Marriage Act as unconstitutional, the President instructed the Cabinet to review over 1,000 federal statutes and regulations to ensure the decision was implemented swiftly and smoothly by the federal government to recognize the rights of same-sex couples.

· The Administration has long advocated for a Constitutional guarantee of marriage equality for same-sex couples—a position the Supreme Court vindicated in its historic decision in Obergefell v. Hodges.

· In October 2015, after the Supreme Court’s decision in Obergefell v. Hodges, the U.S. Department of the Treasury announced proposed regulations implementing the Supreme Court’s same-sex marriage decision for federal tax purposes to ensure all individuals would be treated equally under the law.

· After the Supreme Court issued a decision in Obergerfell v. Hodges, the Social Security Administration (SSA) began to recognize all valid same-sex marriages for purposes of determining entitlement to Social Security benefits or eligibility for Supplemental Security Income. SSA continues to work closely with the LGBT advocacy community to conduct outreach to ensure that same-sex couples are aware of how same-sex marriage affects benefits.

· In July 2014, the President signed an Executive Order prohibiting federal contractors from discriminating against any employee or applicant for employment “because of race, color, religion, sex, sexual orientation, gender identity, or national origin,” continuing to set an example as a model employer that does right by its employees.

· The Administration has taken unprecedented steps to protect and promote the rights of transgender and gender non-conforming Americans. These actions have included:

· The release of joint guidance from the U.S. Departments of Education and Justice to provide educators with the information they requested to ensure that all students, including transgender students, can attend school in an environment free from discrimination. Additionally, the Department of Education published Examples of Policies and Emerging Practices Guide for Supporting Transgender Students.

· The issuance of guidance from the Department of Justice that concluded that the prohibition against sex discrimination in Title VII of the Civil Rights Act of 1964 encompasses claims of discrimination on the basis of gender identity, including transgender status.

· Agencies, including OPM, the State Department, SSA, and HHS, took various actions to ensure that transgender Americans were treated fairly and without discrimination in the workplace, in official documents, and in the health care system.

· In 2009, HUD commissioned the first-ever national study of discrimination against members of the LGBT community in the renting and sale of housing. The Department also launched a website to allow citizens to offer comments on housing discrimination based on sexual orientation and gender identity. Since then, HUD has continuously worked to address LGBT housing discrimination.

· In January 2012 and in 2015, the President issued a final rule and subsequent guidance to ensure that the Department of Housing and Urban Development’s core housing programs and services are open to all persons regardless of sexual orientation or gender identity.

· In 2013, HUD teamed up with the True Colors Fund to give LGBT youth a safe space to be their true selves. Over the next two years, the initiative has developed and evaluated strategies to prevent lesbian, gay, bisexual and transgender youth from becoming homeless or intervene as early as possible once they do become homeless.

· In December 2015, the Department of Justice issued Guidance on Identifying and Preventing Gender Bias in Law Enforcement Response to Sexual Assault and Domestic Violence. The guidance serves two key purposes. First, it aims to examine how gender bias can undermine the response of law enforcement agencies to sexual assault and domestic violence. Second, it provides a set of basic principles that – if integrated into law enforcement agencies’ policies, trainings and practices – will help ensure that gender bias, either intentionally or unintentionally, does not undermine efforts to keep victims safe and hold offenders accountable.

Advancing and Protecting the Rights of LGBT Persons around the World

· The Obama Administration continues to engage systematically with governments around the world to advance the rights of LGBT persons. The Administration’s leadership has included various public statements and resolutions at the UN.

· President Obama has also issued a presidential memorandum that directs all Federal agencies engaged abroad to ensure that U.S. diplomacy and foreign assistance promote and protect the human rights of LGBT persons.

· The Department of State continues to grow the Global Equality Fund, a multi-sector public-private partnership to advance the human rights of LGBT persons globally. Since the Fund was launched in December 2011, it has allocated over $30 million to civil society organizations in 80 countries worldwide.

· USAID, the U.S. government agency primarily responsible for delivering international aid and assistance, launched the LGBTI Global Development Partnership and “Being LGBTI in Asia,” and funded a range of LGBTI human rights programs. In 2014, USAID released its LGBT Vision for Action, a document that communicates USAID’s position on LGBTI issues to internal and external stakeholders.

· In February 2014, USAID appointed a USAID Senior LGBT Coordinator to ensure that the promotion and protection of LGBTI rights is fully integrated into all aspects of USAID’s vital work overseas.

· In February 2015, the U.S. State Department appointed the first-ever Special Envoy for the Human Rights of LGBTI Persons to lead and coordinate U.S. diplomatic efforts to advance LGBTI rights around the globe.

· The State Department revised its Foreign Affairs Manual to allow same-sex couples to obtain passports under the names recognized by their state through their marriages or civil unions.

· On May 28, 2014, the Department of the Interior announced a new National Park Service theme study to identify places and events associated with the civil rights struggle of LGBT Americans and ensure that the agency is telling a complete story of America’s heritage and history. The results of the theme study are expected later this year.

· On June 9, 2015, the Henry Gerber House in Chicago, IL was designated a National Historic Landmark. Once the residence of noted gay rights activist Henry Gerber, the home was where the nation’s first chartered LGBT rights organization, the Society for Human Rights, was formed in 1924. The Henry Gerber House is one of nine LGBT sites that have been designated as a landmark or historic place during the Obama Administration.