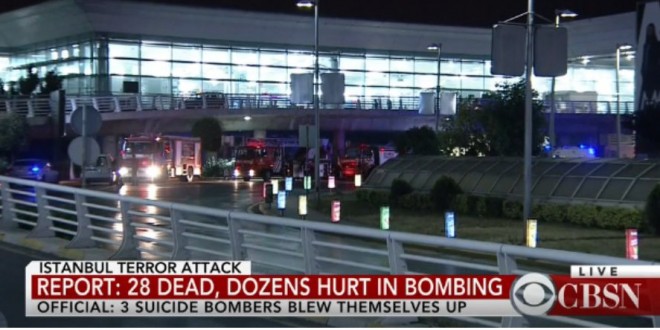 At least 28 people have been killed and 60 others wounded in the attack on Istanbul Ataturk Airport in Turkey, according to Turkey’s semi-official news agency Anadolu. The report says six of the wounded are in a critical condition. A total of 49 ambulances were sent to the site.

Turkey’s Justice Minister Bekir Bozdag earlier said at least 10 people were killed and 20 others injured. The two suicide bombers were also killed. Bozdag said one attacker “first opened fire with a Kalashnikov then detonated himself” at the airport entrance.

In total two bombs exploded. One of them was located just outside the terminal on the pavement, the other was at the security gate at the entrance to the airport.

Footage from scene in #Turkey #Istanbul after suicide bombing. Praying for injured pic.twitter.com/c02SIfMfmN

Previous Donald Trump Vows: I’ll Withdraw The “United Straights” From The Trans-Pacific Partnership [VIDEO]
Next GOP Rep. Steve King: Nobody Would Have Been Shot In Orlando If The Patrons All Had Guns [AUDIO]