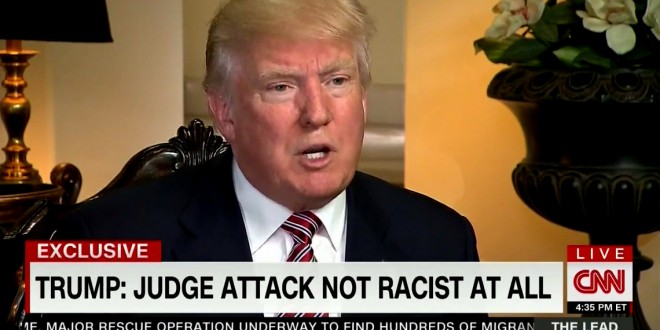 Trump Doubles Down On Judge: He’s Unfair Because He’s Mexican And I’m Going To Build That Wall [VIDEO]

Donald Trump on Friday vociferously defended his claims that a judge overseeing a lawsuit against Trump University is biased because of his Mexican heritage — pushing back against criticism that his objections are racist.

Speaking with CNN’s Jake Tapper on “The Lead,” Trump repeatedly referenced his plans to build a wall between the U.S. and Mexico and renegotiate trade agreements between the two countries.

The presumptive GOP nominee said U.S. District Court Judge Gonzalo Curiel, a federal district judge in the Southern District of California, has made “rulings that people can’t even believe.”
“He’s proud of his his heritage. I respect him for that,” Trump said, dismissing charges that his allegation was racist. “He’s a Mexican. We’re building a wall between here and Mexico.”