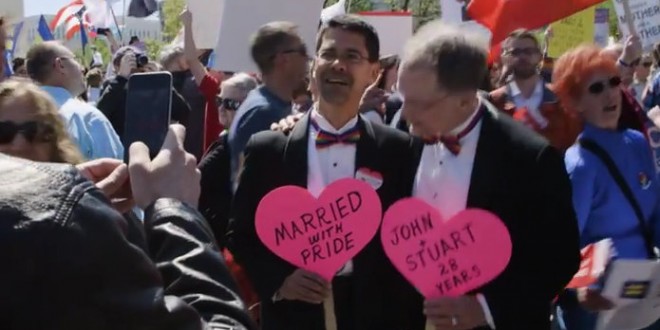 TRAILER: The Freedom To Marry

Just in from Evan Wolfson, former president of the gone-out-of-business Freedom To Marry:

On June 26, it will be one year since the U.S. Supreme Court affirmed the freedom to marry nationwide.

Love won – and the path to our triumphant victory stretched back years and miles. It was paved by the efforts, talents, and engagement of millions of people. It required a dream, hard work – and a plan. And it succeeded through a national conversation among all Americans about who LGBT people are and why marriage matters.

These days especially, as we share our grief and celebrate the lives of the 49 victims of the Orlando shooting, we again see the power of stories to touch hearts and inspire action. Sparking conversation and turning support into political and legal change were the core of our strategy to win the freedom to marry – and we know from the marriage victory that change can happen, even against all odds.

Now you can get an inside look at the movement that transformed a nation and the law. Award-winning filmmaker Eddie Rosenstein has just finished a powerful feature documentary that truly captures the riveting story of how we won. Rosenstein’s The Freedom to Marry is a “War Room” style film that provides an emotional, behind-the-scenes view of the campaign and strategy that ended marriage discrimination nationwide.

In The Freedom to Marry, you’ll hear firsthand from April DeBoer & Jayne Rowse – two of the courageous plaintiffs who took the fight for the dignity of their family and children all the way to the Supreme Court. You’ll have a front-row seat as our movement’s litigators, including the indomitable Mary Bonauto, prepare to stand before the nine justices of the Supreme Court to make the case for marriage. And you’ll see my cherished Freedom to Marry team criss-crossing the country, working with organizations and allies to rack up the building-block wins and create the climate that allowed for victory.

The Freedom to Marry film captures the behind-the-scenes story of how our movement – from same-sex couples in Kentucky to loving parents in Texas to funders and organizations from California to Maine who dug down and did the work – transformed a “preposterous notion” into one of the most successful civil rights campaigns in history.

Previous TRAILER: Looking, The Movie
Next No Early Release For Gay-Basher Kathryn Knott