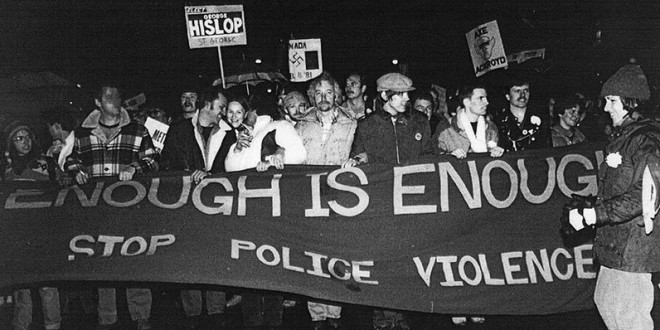 From the Toronto Star:

When police stormed four gay bathhouses in Toronto on Feb. 5, 1981, patrons were mocked, humiliated — and arrested by the hundreds. The raids outed men who considered the private clubs a sanctuary, free from the hostility of a populace who disapproved of, or didn’t understand, intimacy between men.

On Wednesday, Toronto police Chief Mark Saunders will make a historic apology for the raids at his annual Pride reception at police headquarters, the Star has learned. He will also apologize for a 2000 raid by six male officers on Club Toronto during a women’s bathhouse event known as the “Pussy Palace.” Police claimed to be searching for liquor violations. Many of the women were nude and felt violated, according to a story in the Star. Police settled a civil suit in 2005.

The Toronto Police Service worked with prominent gay activist Rev. Brent Hawkes to craft the apology, a source said. The chief’s event will be an acknowledgment of the past and a commitment to efforts going forward, with new initiatives that speak directly to the LGBTQ community, the source said.