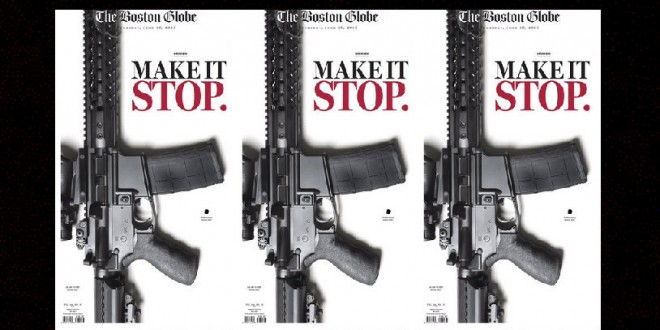 The Boston Globe Calls Out Six Senators Who Could Help Swing Tide On Gun Control: MAKE IT STOP

From the Boston Globe:

Greed, legislative cowardice, advanced technology — that is how we got here. The United States has been pummeled by gun violence since the assault weapons ban expired in 2004. This year, mass shootings have already claimed 61 lives. One class of gun, semiautomatic rifles, is largely responsible. But this nation cannot be a hostage of fear. We can make it stop.

THESE SIX SENATORS STAND IN THE WAY.

Most observers agree that any true gun control reform will need to first come out of the Senate. Using a baseline of the 2013 vote on expanded background checks after the killings in Newtown, Conn., the dynamics of the gun debate would likely change dramatically if the six senators pictured here are either ousted come November — or if they could be persuaded to change their vote. Other Senate races to watch include Illinois, Pennsylvania, Colorado, and Nevada.