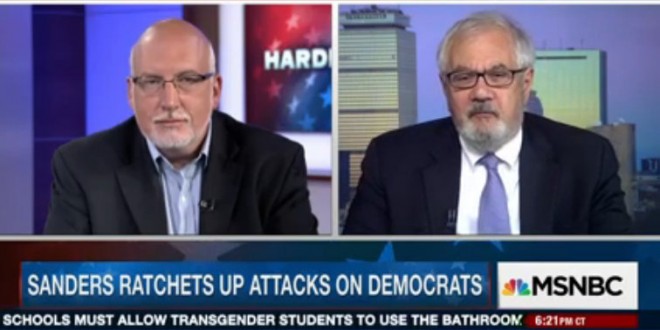 Tensions are running high between Hillary Clinton’s campaign and Bernie Sanders’ campaign during the final stretch of this protracted Democratic primary and some of the most contentious moments are caught on live television.

“Sen. Sanders is disappointed that he hasn’t won,” Frank, who has been a vocal critic of Sanders, said during an earlier interview with MSNBC’s Kate Snow. “He’s losing not because anything was rigged or there was dirty trickery. He’s losing because Hillary Clinton has gotten more votes.”

Over the weekend, the Sanders campaign demanded that Frank and Connecticut Governor Dan Malloy be removed as co-chairs of the Rules Committee and Platform Committee, respectively, claiming that they were “self-proclaimed partisans intent on marginalizing” Sanders.

Although Sanders’ petition to run out the first openly gay member of Congress was ultimately rejected by the DNC, his campaign has vowed to take the fight to the convention floor in Philadelphia next month. On MSNBC’s “Hardball” Wednesday, Frank faced off against Sanders Campaign Manager Jeff Weaver on this issue.

Previous This Is An Ad For Something [VIDEO]
Next Hillary Clinton Delivers Major Foreign Policy Speech, Slams Donald Trump Throughout [VIDEO]