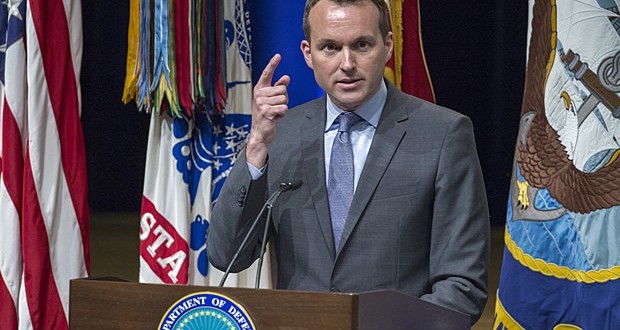 Another first! Via press release:

On the heels of his historic confirmation by the U.S. Senate as the 22nd Secretary of the U.S. Army, Eric Fanning will take the stage as keynote speaker at Friday’s rally and serve as one of San Diego Pride’s Hon. Grand Marshals for the parade on Saturday.

“From José Sarria, to Harvey Milk, to Eric Fanning, LGBT service members and Department of Defense civilians have been a crucial part of the fabric of our movement and this nation,” said Fernando Lopez, San Diego Pride Director of Operations. “San Diego has such a vibrant LGBT service member and veteran community, we know his presence is going to mean the world to so many. It is an incredible honor to host Secretary Fanning at San Diego Pride.”

“I am humbled to be the keynote speaker and an honorary Grand Marshal. As our community moves forward, we strive for full inclusion of all Americans who can do the job, and just want an opportunity to serve the Nation they love,” said Secretary of the Army Eric Fanning.

The Spirit of Stonewall Rally, will take place at the Pride Festival Mainstage at Marston Point in Balboa Park, Friday, July 15, at 6:00pm.

The parade kicks off on Saturday at 11AM in San Diego’s Hillcrest gayborhood.