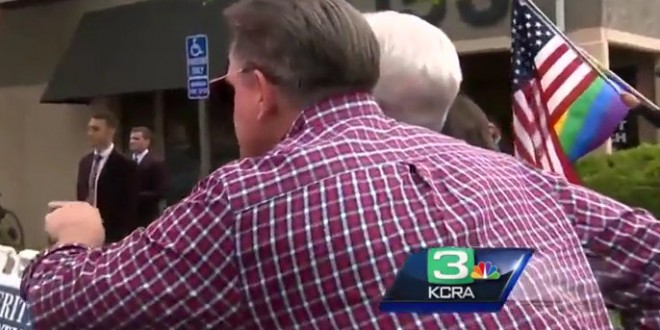 SACRAMENTO: Church Members Laugh And Wave As Protesters Shout At Christian Pastor Who Called For Shooting Gays In The Head [VIDEO]

About 100 people protested Wednesday night outside of a Sacramento Baptist church after a pastor praised the Orlando mass shooting during his sermon. It was supposed to be a silent protest, but dozens of people shouted and sang as parishioners, with Bibles in hand, tried to make their way through the crowd.

Yellow tape and Sacramento County sheriff’s deputies kept protesters back and didn’t allow them inside. Pride flags and posters filled the parking lot of Verity Baptist Church in Sacramento as protesters tried to get the attention of Pastor Roger Jimenez.

During his sermon Sunday, Jimenez talked about sodomites and said it is “unnatural to want to be with some of the same sex.” As he continued to speak, Jimenez said he was upset more people didn’t die. The sermon was recorded and uploaded to YouTube. Jimenez briefly came outside but turned back around as protesters continued to shout.

The tense scene that unfolded outside the church – where protesters screamed “Would you kill me?” as the silent parishioners passed by – offered a window into the anguish of LGBT people across the country, who are coming to terms with the unprecedented attack on the queer community less than one year after same-sex marriage became the law of the land in the US.

“There’s no tragedy,” Jimenez said in his speech, which was posted on YouTube and quickly went viral, before the site removed it for violating its policy on hate speech.

“I wish the government would round them all up, put them up against a firing wall, put a firing squad in front of them, and blow their brains out.”

In the face of international outrage, Jimenez didn’t back down, instead telling a local reporter outside his door: “When people die who deserve to die, it’s not a tragedy.”

While many stories have emerged of Christians and LGBT people uniting in the wake of the horrific violence, the Jimenez controversy sheds light on the overt bigotry that is still pervasive in pockets of the country – even in a liberal state like California.

Another protest is planned for Sunday.

Previous John Grant & Kylie Minogue – Glacier [VIDEO]
Next Bondi Vs Cooper, Part 4: Anderson Mocked Me For Saying We Should Focus On Unity And Love [VIDEO]