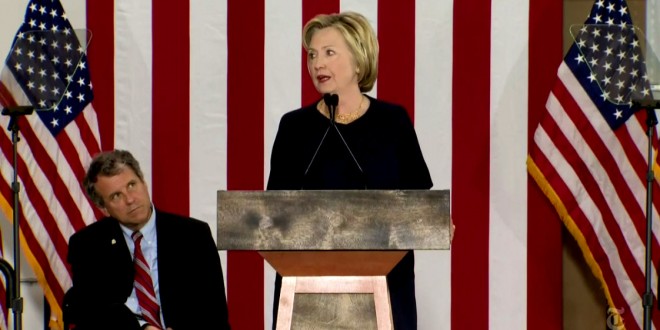 Drawing a stark contrast between herself and Donald Trump and renewing her calls for stricter gun control in the aftermath of the deadliest mass shooting in U.S. history, Hillary Clinton declared Monday that “weapons of war have no place on our streets.”

“It’s essential we stop terrorists from getting the tools they need to carry out their attacks,” Clinton said at a Cleveland rally – her first speech since a gunman opened fire at a nightclub in Orlando. “And that is especially true when it comes to assault weapons like the ones used in Orlando and San Bernardino.”

In addition to calling for a new assault weapons ban, Clinton also demanded pushed for new laws that would prevent people on the FBI’s no-fly list from buying guns and that would increase the scrutiny of comprehensive background checks on weapons purchasers.

“We may have our disagreements about gun safety regulation but we should all be able to agree on a few essential things,” Clinton said to applause. “If the FBI is watching you for suspected terrorist links, you shouldn’t be able to just buy a gun with no questions asked.”