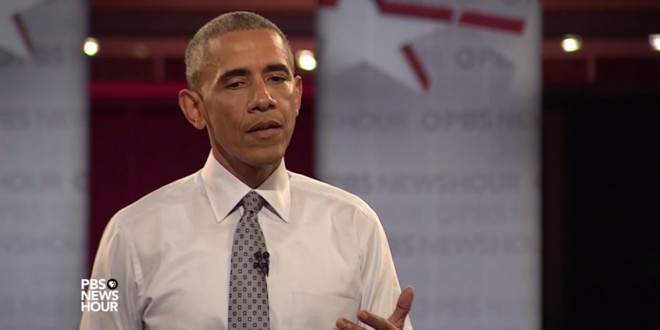 Obama Speaks Out On Transgender Students: We Should Treat Them With Dignity And Kindness [VIDEO]

President Obama predicted on Wednesday courts will settle which public restroom transgender students should be able to use amid continuing controversy over the issue. Obama made the remarks in response to a question during a town hall on “PBS News Hour” with Gwen Ifill as part of a trip to Elkhart, Ind., in which he promoted his economic agenda. The question from came from Arvis Dawson, who identified himself as a community organizer and said he supports equal rights, but has issues with transgender restroom use.

Obama said many things are indeed before him and denied he sought to make bathroom use an issue, but felt compelled to respond because he thinks transgender children are being treated unfairly. “What happened and what continues to happen is you have transgender kids in schools,” Obama said. “And they get bullied. And they get ostracized. And it’s tough for them.”

Obama told Dawson they’re of a generation where transgender people were out of sight, and so “people suffered silently,” but now things have changed and schools asked the administration for guidance.

“And my answer is that we should deal with this issue the same way we’d want it dealt with if it was our child,” Obama said. “And that is to try to create an environment of some dignity and kindness for these kids. And that’s sort of the bottom line.”