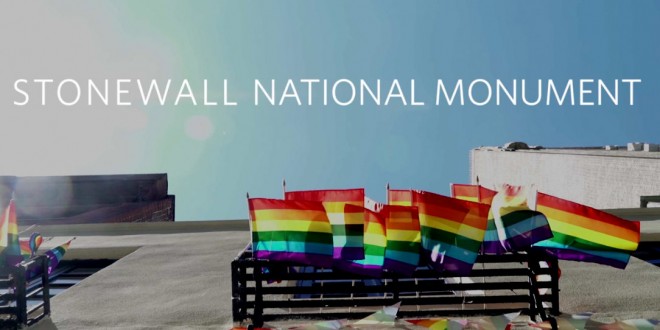 Since taking office, President Obama and his Administration have made historic strides in expanding opportunities and advancing equality and justice for all Americans, including lesbian, gay, bisexual, and transgender (LGBT) Americans. From major legislative achievements to historic court victories to important policy changes, the President has fought to promote the equal rights of all Americans — no matter who they are or who they love. That commitment to leveling the playing field and ensuring equal protection under the law is the bedrock principle this nation was founded on and has guided the President’s actions in support of all Americans.

Today, President Obama will designate a new national monument at the historic site of the Stonewall Uprising in New York City to honor the broad movement for LGBT equality. The new Stonewall National Monument will protect the area where, on June 28, 1969, a community’s uprising in response to a police raid sparked the modern LGBT civil rights movement in the United States.

The designation will create the first official National Park Service unit dedicated to telling the story of LGBT Americans, just days before the one year anniversary of the landmark Supreme Court decision guaranteeing marriage equality in all 50 states. Additionally, in celebration of the designation and New York City’s Pride festival, the White House, in coordination with the National Park Foundation and the Outdoor Advertising Association of America, is releasing a video that will be played on the billboards in Times Square on Saturday, June 25, beginning at 12:00pm ET.

Today’s designation follows years of strong support from local officials, organizations, members of Congress and citizens in New York City and across the country, as demonstrated recently at a public meeting held in New York City in May. The National Park Foundation is also today announcing that it will support the establishment of a local Friends Group to support the monument and that it will work with local and national organizations and the community to raise funding for dedicated National Park Service personnel, a temporary ranger station and visitor center, research and materials, exhibits, community outreach, and public education.

UPDATE: The National Parks Conservation Association has released a statement.

NPCA, thousands of its advocates and hundreds of partner organizations have worked for more than two years to help pave the way for our nation’s first lesbian, gay, bisexual and transgender (LGBT) unit of the National Park System. On June 24, 2016 President Obama made history by declaring the area around the Stonewall Inn in Greenwich Village, New York, a national monument.

Our national parks belong to all of us — a fact that is particularly important during the Park Service’s centennial this year, and as we look ahead to its next 100 years. As America’s storyteller, the National Park Service is responsible for sharing the history of our diverse population. Now, thanks to this victory, this site of mass resistance that led to larger social and political change will now be preserved as part of our national heritage for future generations.