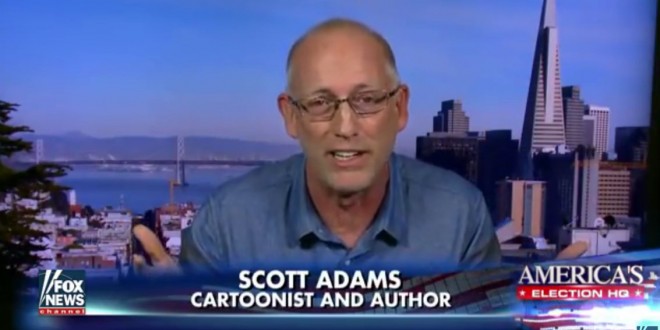 Nutjob Dilbert Cartoonist Scott Adams: I’m Endorsing Hillary Because I Might Be Assassinated If I Don’t

Dilbert cartoonist Scott Adams says he is endorsing Hillary Clinton because her supporters might murder him if he doesn’t. And he’s “100% serious” about that. He writes:

If Clinton successfully pairs Trump with Hitler in your mind – as she is doing – and loses anyway, about a quarter of the country will think it is morally justified to assassinate their own leader. I too would feel that way if an actual Hitler came to power in this country. I would join the resistance and try to take out the Hitler-like leader. You should do the same. No one wants an actual President Hitler.

So I’ve decided to endorse Hillary Clinton for President, for my personal safety. Trump supporters don’t have any bad feelings about patriotic Americans such as myself, so I’ll be safe from that crowd. But Clinton supporters have convinced me – and here I am being 100% serious – that my safety is at risk if I am seen as supportive of Trump. So I’m taking the safe way out and endorsing Hillary Clinton for president.

As I have often said, I have no psychic powers and I don’t know which candidate would be the best president. But I do know which outcome is most likely to get me killed by my fellow citizens. So for safety reason, I’m on team Clinton.

My prediction remains that Trump will win in a landslide based on his superior persuasion skills. But don’t blame me for anything President Trump does in office because I endorse Clinton.

The rest of you are on your own. Good luck.

Adams has an estimated net worth of $75M.

Previous American Family Association: Don’t Fund HIV/AIDS Research, Just Tell Gays To Stop Having Sex [VIDEO]
Next Dem US House Rep. Filemon Vela To Trump: You Can Take Your Racist Border Wall And Shove It Up Your Ass