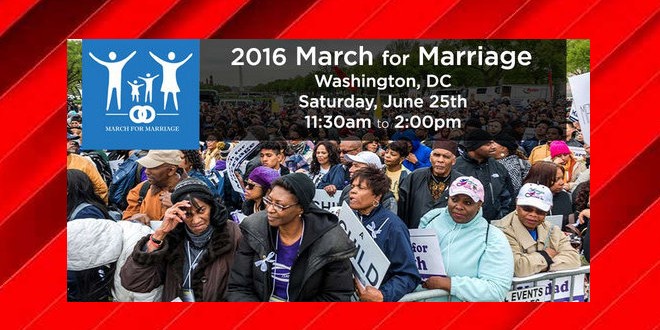 Great news — we’ve received official word that our permit application for the 2016 March for Marriage has been approved, and we are moving forward! The March is set for Saturday, June 25th, from 11:30am until 2:00pm. Please mark your calendar to attend and spread the word to everyone that you know. This year’s March will protest the outrageous, anti-constitutional and illegitimate decision of the US Supreme Court redefining marriage.

This was a decision wholly unsupported by the law and lacking any legal foundation. The majority simply legislated from the bench, imposing their own values on the country. In the process, they stripped over 50 million voters and countless legislators in states across America of their sovereign right to define marriage as the union of one man and one woman.

We have a lot to do to get ready for this year’s March for Marriage, and we’re asking for your help. Your tax deductible contribution of $25, $50, $75, $100 or $250 or more will help us cover the substantial costs involved in putting on an event like this. We need money for security, promotion, signs, staging, sound engineering, etc. Your financial gift will be put to immediate use to help us prepare for this critical event.

We are also marching to protest the imposition of a dangerous gender ideology by LGBT extremists and the Obama administration. They want to risk the privacy and safety of girls and women by allowing men who claim a female “gender identity” to force their way into bathrooms, showers, changing areas and locker rooms. These extremists mock God’s admonition that He made us male and female, and they want our children and grandchildren to believe that they can simply “choose” their gender. And worse, our children and grandchildren will be taught that there are multiple genders — several dozen, the extremists claim — and anyone who does not accept their bizarre ideology will be guilty of discrimination and open themselves to lawsuits, fines and reputational ruin.

Finally, we will march to demand that Congress and our elected representatives do something to stop the Obama madness and protect us from the Supreme Court’s anti-constitutional redefinition of marriage while we work to undo it. In the short run, we demand that Congress pass the First Amendment Defense Act to provide legal protections for supporters of traditional marriage from being persecuted by the government. It’s also critical that the next president be committed to appointing strict constitutionalists to the US Supreme Court: judges who will implement the law, not make it up to satisfy politically influential groups like the LGBT lobby.

Last year’s Hate March 3 drew a laughable 3000 attendees, many of whom were bused in by nutjob New York state Sen. Ruben Diaz, who had told his followers that the event was a pro-immigration rally. Brian Brown, of course, claimed that the attendance was 15,000.