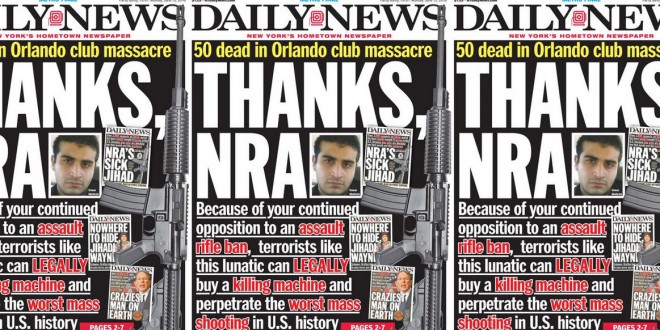 His killing machine of choice was a mass murderer’s best friend — and his enabler a gun lobby that has long opposed efforts to keep assault weapons out of the hands of bloodthirsty maniacs. The madman who killed at least 50 people and wounded 53 others at an Orlando club early Sunday was armed with an AR-15-type rifle.

It’s the same style of weapon used to slaughter 20 children and six adults in Newtown, Conn., in 2012. Earlier that year, James Holmes used an AR-15 to murder 12 people and wound 70 in a movie theater in Aurora, Colo.

There were calls to ban the weapon after the Newtown shootings, which led to a spike in sales. Gun manufacturers have called the AR-15 one of the most popular weapons in the U.S., with more than 3 million estimated to be in circulation. Regulations on magazine capacity for the weapon vary from state to state, but it can fire 45 rounds a minute.

Most forms of the gun had been prohibited under the 1994 federal assault weapons ban that was allowed to expire in 2004, following ferocious lobbying by the National Rifle Association. The NRA has used its lobbying might in the years since to bury attempts to revive the ban.

In January, the NRA’s blog ran an article headlined “Why the AR-15 Is America’s Most Popular Rifle.” It can be “wrapped in all different types of colors and patterns,” its “customizability allows for all types of stocks, barrel and carbine-lengths,” and “so, so, soooo many accessories,” the post gushed.