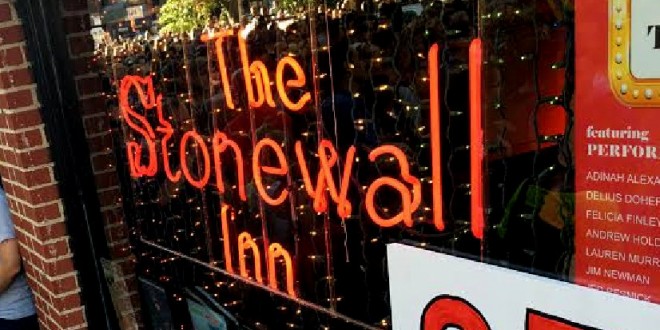 An historic meeting happened today at the Stonewall Inn, where U.S. Ambassador to the United Nations and member of President Obama’s Cabinet, Samantha Power, hosted a meeting of the UN’s LGBT Core Group. The LGBT Core Group is a group of countries working to promote and enshrine LGBT rights as human rights at the UN and across the world.

Ambassadors and representatives from 16 countries, the European Union, the United Nations, and civil society met to reflect on the tragic attack at Orlando’s Pulse nightclub in the early hours of Sunday, June 12. Before participating in an official meeting, the Core Group members heard a presentation on the significance of the Stonewall in the context of the LGBT rights movement in the United States and across the world.

Let me tell you a little bit about why we’re here and why we chose Stonewall to come and meet. So what you have gathered around you is a group of ambassadors and representatives of all the countries that comprise what we call at the UN the LGBT Core Group, and this is a really diverse group that has dedicated itself to promoting LGBT rights at the United Nations and around the world. And we couldn’t think of a more symbolic place a few days after the monstrous attacks in Orlando to come than this one, because what you described back in 1969 was people who didn’t feel safe, weren’t safe loving who they loved and being who they were, and viewing Stonewall as a refuge. And when you think about what happened at the Pulse in Orlando, these were people who felt completely safe. And it is a testament to some of the progress that’s been made over 47 years because of the revolution that was sparked by what you and others experienced here and generated here at Stonewall back in 1969.

So the progress has been made. People were feeling safe; they were feeling secure, and then that sense of security was completely shattered. And I think as we grieve with the families of those who were taken in such a horrifying way Saturday night, and as we stand in solidarity with the LGBTI community here in the United States, we’re also really motivated as a group because all around the world on any given day there are people who don’t know if that day will be their last.

Because not only is being LGBT criminalized – in some countries, there’s even the death penalty that can be imposed just if you’re a man loving a man, if you’re a woman loving a woman – but vigilante violence that is not contested by the state is something that is extremely prevalent. And so we’ve seen in so many parts of the world people being targeted just because of who they love. And this is a group that wants to change that. We’ve made some headway over the course of recent years at the UN. Indeed the Orlando attack was something that the UN Security Council, which had never referenced the targeting of people on the basis of sexual orientation in the entire 70-year history of the UN, this week condemned the targeting of people on the basis of sexual orientation for the very first time. Again, so moved were they by what happened in Orlando.

And so that’s one example, but there are many others of us trying together to show unity and to ensure that there are far fewer “no go zones” for LGBTI people around the world and far more safe spaces that don’t get punctured, as the Pulse was punctured and lives were taken on Saturday night. So this is an amazing show of unity. We wanted to do it here because of what you brought in your simple, modest way of just claiming what was right, and we’ve got to do the same and stand in solidarity with others who haven’t made the progress of getting to rebuild their equivalent of the Stonewall.