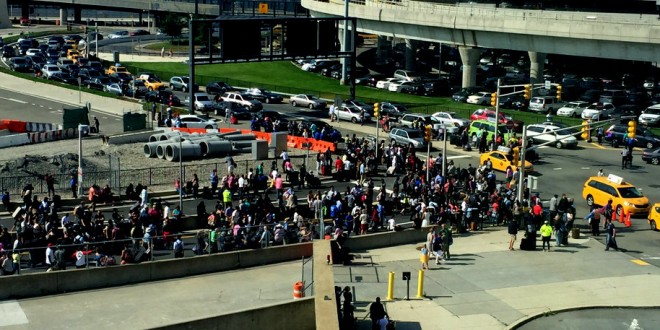 Because some idiot walked away from his suitcase. Gothamist reports:

JFK, LaGuardia, and Newark airports are tightening security today, following yesterday’s suicide bombing at Istanbul’s Ataturk airport that left 41 dead and over 230 injured. So far, the Port Authority has sent armored trucks loaded with tactical weapons to patrol outside area airports, and JFK’s Terminal 5 was briefly shut down this morning after a “suspicious package” alert. Apparently just before 9 a.m., a Homeland Security K9 dog flagged an unattended suitcase. The terminal was evacuated as a precaution, and police were blocking off the roads. The Port Authority police say the bomb squad responded to the bag alert, and the package was cleared at around 9:40 a.m. The terminal has since resumed normal operations.

JetBlue is the primary tenant of Terminal 5.