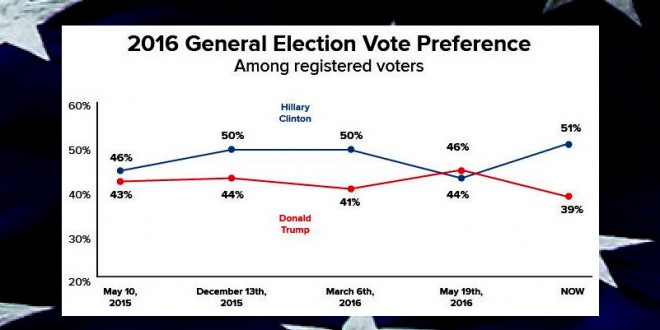 Donald Trump returns to the campaign trail from Scotland this week contending with sweeping unease about his candidacy as a large majority of Americans register their disapproval and see the Republican Party’s presumptive presidential nominee as discriminatory and unqualified, according to a new Washington Post-ABC News poll.

Following a month of self-­inflicted controversies, the survey shows that support for Trump is plunging, including among fellow Republicans, propelling Democrat Hillary Clinton to a double-digit lead nationally. The poll reveals fresh doubts about Trump within his own party just three weeks before Republicans convene in Cleveland for their national convention.

The survey finds broad objections to Trump’s candidacy — from his incendiary rhetoric and values to his handling of both terrorism and his own business — foreshadowing that the November election could be a referendum on Trump more than anything else.

Roughly 2 in 3 Americans say that they think Trump is unqualified to lead the nation; are anxious about the idea of him as president; believe his comments about women, minorities and Muslims show an unfair bias; and consider his attacks on a federal judge because of his Mexican American heritage to be racist. The "dirty" poll done by @ABC @washingtonpost is a disgrace. Even they admit that many more Democrats were polled. Other polls were good.

.@CNN is all negative when it comes to me. I don't watch it anymore.