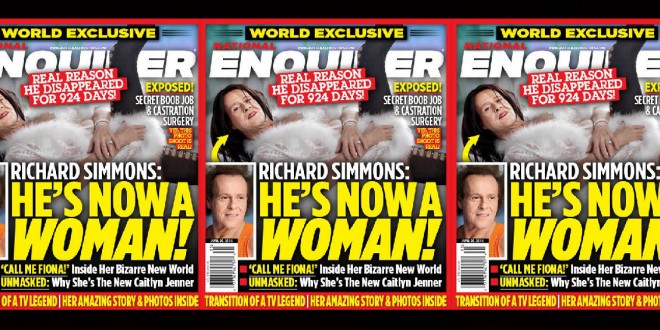 From the National Enquirer:

After nearly 1,000 days in hiding and a sudden hospitalization, The National ENQUIRER can now reveal the bombshell reason why Richard Simmons is no longer the man his fans used to know: He’s changed into a woman!

In an explosive world exclusive, The ENQUIRER can now reveal jaw-dropping never-before-seen photos of Simmons draped in furs and lingerie, living as a woman behind the walls of his Hollywood Hills mansion!

Insisted a friend, “[This is] not just Richard Simmons in drag. This is Richard dressed as a softly spoken woman named Fiona!”

Two years of secret surgeries have brought him to this point, said the source. From breast implants to hormones and more, he’s sparing no expense to make the transformation complete!

The incredible pictures of Simmons, 67, with flowing brunette locks and womanly curves are photoshop-free. And a friend of the exercise guru insisted, “[This is] not just Richard Simmons in drag. This is Richard dressed as a softly spoken woman named Fiona!”

Like Jenner, Simmons has opted for breast implant surgery, hormone therapy, and a host of other invasive changes to create the transformation, The ENQUIRER reported. And while he’s yet to make a public announcement, the magazine said he’s secretly been venturing out of his Hollywood Hills home dressed as a woman for months.

Radar exclusively reported in March that Simmons had begun dressing as a female on occasion. “Richard would go into great detail about the outfits he would wear,” an insider said at the time. “It’s a fun thing for him to do.”