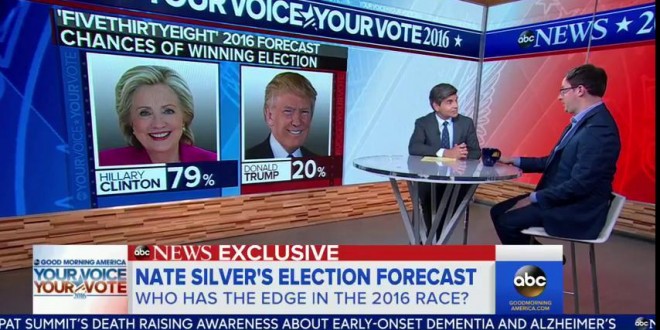 This morning on ABC’s “Good Morning America,” FiveThirtyEight’s Nate Silver predicted that Hillary Clinton will win the general election against Donald Trump. Clinton has a 79 percent chance of winning the election, compared to Trump’s 20 percent, according to FiveThirtyEight’s forecast.

“We’re at halftime of the election right now,” Silver said. “She’s taking a seven-point, maybe a ten-point lead into half time. There’s a lot of football left to be played. She’s ahead in almost every poll, every swing state, every national poll.”

Silver said “both candidates have a lot of room to grow,” but historically the only candidate to blow a lead like the one Clinton holds now was former Massachusetts Gov. Michael Dukakis in 1988.