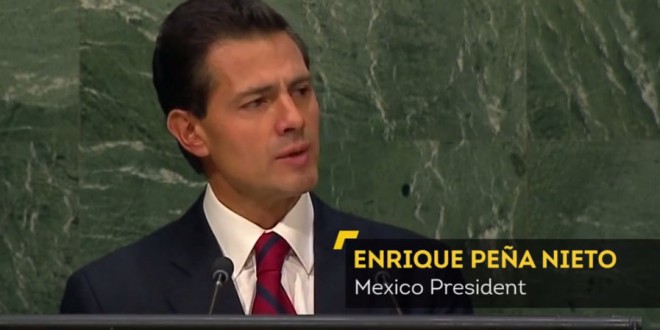 Mexico’s President: Why I Acted On Marriage Equality

Following a 2010 ruling by Mexico’s Supreme Court, same-sex marriage is recognized in all 31 Mexican states, but currently only nine states have enacted laws that allow gay couples to marry locally without going to court. Last month President Enrique Nieto proposed a constitutional change to force the remaining states to comply. Yesterday he authored a Huffington Post column explaining his action. He writes:

As President, it is my duty to ensure that the personal beliefs and customs of some do not limit the human rights of others. Mexico has in fact moved ahead at a tremendous speed in the recognition of equality. A national poll, for example — taken just a few days after we announced this package of measures — shows that 64 percent of Mexicans now recognize homosexuality as an “acceptable way of life.” Back in 2000, this figure was only 27 percent. What is more, according to the same poll, today 66 percent of people fully or partially agree that same-sex marriage should be allowed under our Constitution.

Despite these advances, large challenges still persist, including the fact that numerous laws and norms in Mexico continue to be discriminatory. Recognizing this obstacle, I also launched an initiative to revise our entire legal framework with the active participation of scholars, civil society organizations and citizens. The aim is to collect recommendations from every corner of our country, in order to identify any and all laws that go against equality and propose the necessary changes to improve them. It is true that legislation alone will not eliminate stereotypes or long-held prejudices, but it is a necessary step to doing so.

For much more about Mexico’s progress towards full marriage equality, see Rex Wockner’s excellent recap on their “wild ride.”