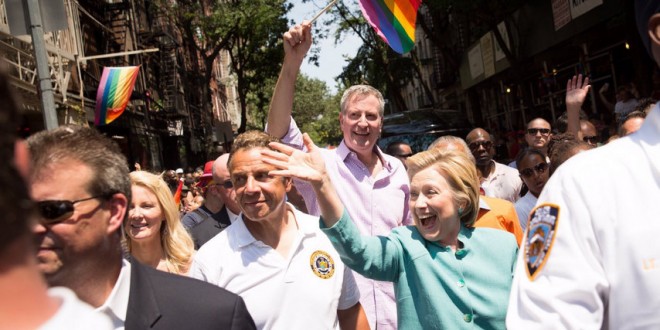 It is difficult to surprise at New York City’s pride parade — that pulsing kaleidoscope of pink unicorn horns and rainbow undergarments, bejeweled miniature dogs and glitter-specked revelers who seemed to have misplaced their shoes.

But around 1:45 p.m. Sunday, beneath a virtually cloudless sky, something was afoot on Christopher Street.

“Hillaryyyyyyyyy!” someone hollered from the sidewalk. And so began a very low-speed chase along the city’s foremost corridor of gay rights.

For four blocks or so — beginning steps from the Stonewall Inn, the nexus of the modern gay rights movement — Hillary Clinton led a mayor, a governor, a phalanx of aides, a crush of reporters and several beleaguered security personnel on a 15-minute stroll.

Later in the evening Hillary delivered a video message on the Pulse massacre via the gigantic jumbotrons at the Pier Dance.