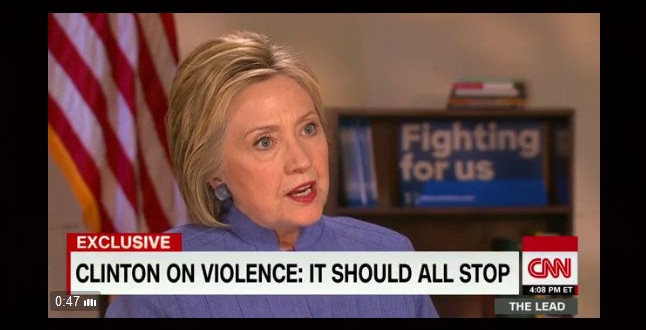 Hillary Clinton on Friday condemned the violence that took place at a recent Donald Trump rally in California but blamed the presumptive Republican presidential nominee in part for having incited violence throughout the primary.

“I condemn all violence in our political arena,” Clinton told CNN’s Jake Tapper in an interview broadcast Friday. “I condemned it when Donald Trump was inciting it and congratulating people who were engaging in it. I condemn it by those who are taking violent protests to physical assault against Donald Trump.”

Clinton said the violence has to end but accused the real estate mogul of setting “a very bad example.” “He created an environment in which it seemed to be acceptable for someone running for president to be inciting violence, to be encouraging his supporters,” she continued. “Now we’re seeing people who were against him responding in kind. It should all stop. It is not acceptable.”