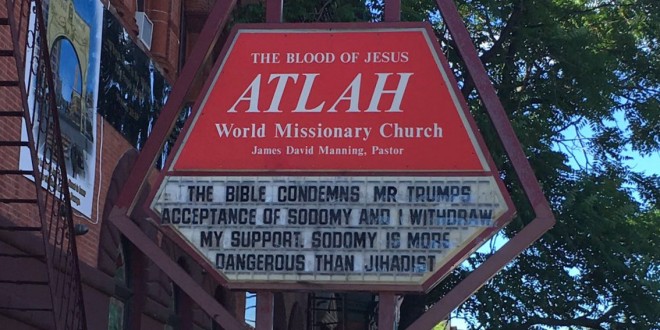 Harlem hate Pastor James David Manning today posted a new billboard in which he withdraws his support for Donald Trump, apparently because Trump’s response to the terror attack on Orlando’s LGBT community was not vicious enough. Tomorrow night activists from Harlem Against Homophobia will hold a candlelight vigil outside Manning’s church.

Early this month Manning’s lawyer requested and received yet another postponement in the bankruptcy case against his church. I’m told that such delays are routine in these kinds of cases and that there might not be a resolution for months.

.@JoeMyGod new #Harlem hate sign up today. We’ll be out there Wed from 8-8:30pm for candlelight vigil. All welcome! pic.twitter.com/VchrK7SQVM