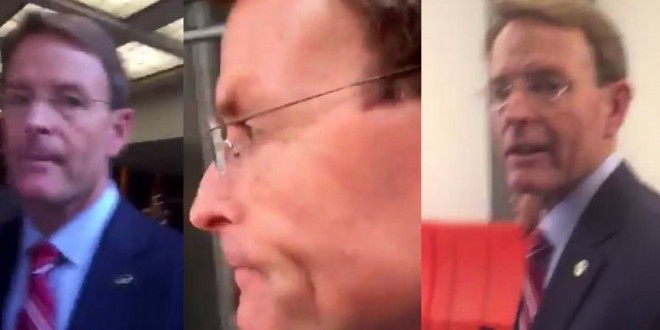 Protesters disrupted a press conference on Tuesday of religious leaders as they discussed their meeting earlier in the day with Republican presidential candidate Donald Trump, NPR reported. Footage from the event posted by Newsday shows a woman telling the group, “Your hate is killing us. Your lies are killing us.” Another woman asked Tony Perkins, who appeared at the press conference on behalf of the anti-LGBT Family Research Council, when his group would “take responsibility” for their rhetoric. The advocacy group GetEQUAL took credit for the demonstration in a statement sent on Tuesday afternoon, identifying the protesters as the organization’s co-directors, Heather Cronk and Angela Peoples.

.@mspeoples confronts Tony Perkins of the @FRCdc “what do you have to say for yourself Tony Perkins?” pic.twitter.com/V8XBov0iwF

2nd LGBT rights protestor to evangelical leaders: “Your hate is killing us. Your lies are killing us.” pic.twitter.com/gmQW6cfvVP