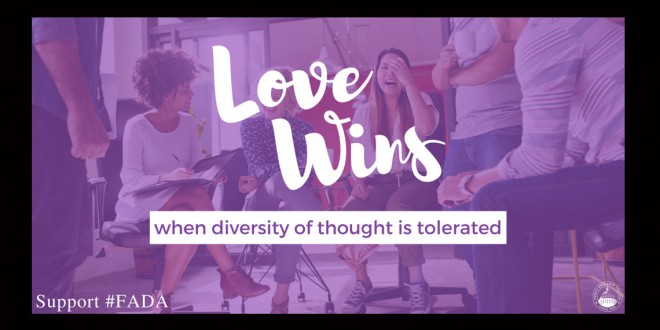 FRC’s Pride Message: Love Only Wins When Christians Are Allowed To Discriminate Against LGBT Americans

The Family Research Council observed LGBT Pride this morning by tweeting out the above lavender-hued message in support of the First Amendment Defense Act (FADA), the bill which would bar the federal government from taking action against individuals or companies that discriminate against LGBT Americans on the basis of “religious belief or moral conviction.” FADA currently has 170 co-sponsors in the House and 37 in the Senate. All are Republicans except six-term Rep. Dan Lipinski (D-IL).

Previous George Will Bails On GOP: Trump Must Be Stopped
Next ISRAEL: Jerusalem Pride Killer Gets Life Sentence