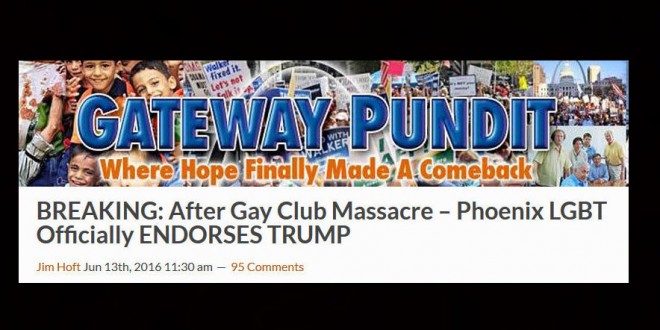 Dumbest Gay Man On The Internet Fails Yet Again

Earlier today extremist blogger Jim Hoft, widely known in the progressive blogosphere as “the dumbest man on the internet,” came out in a Breitbart column in which he urged gays to “come home to the Republican party.”

This afternoon Hoft gleefully reported the “breaking” news that a group called Phoenix LGBT has endorsed Donald Trump. As evidence of this endorsement Hoft posted a message from a Twitter account that was created yesterday. Not only that, the account’s profile oddly links to the Manchester, UK-based LGBT Foundation. The tweet below has been shared nearly 7000 times since Hoft’s posting.

We wanted you to be the first to know, after this horrific attack, we’re officially endorsing Trump. Enough is enough.

The (real) Phoenix Pride LGBT Center has been forced to respond.

If things go as usual over on Gateway Pundit, Hoft will either ignore evidence that he’s been taken or he’ll just delete the post entirely. Either way, many thousands of right wingers now believe that an LGBT group has endorsed Donald Trump.

Previous Texas Lt. Gov. Dan Patrick: I Took Down That Tweet To Stop All Of Your Hateful Comments And Lies
Next ORLANDO RESPONSE: Hillary Clinton Calls For Stricter Gun Control And Ban On Assault Weapons [VIDEO]