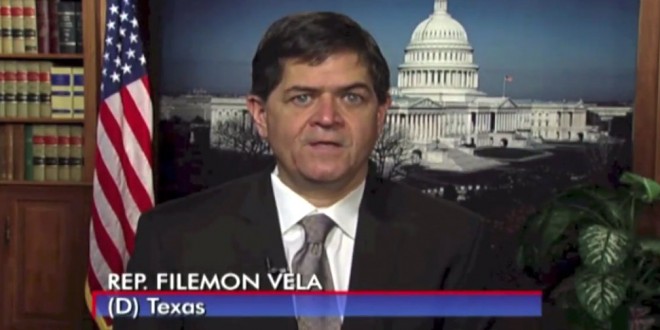 Dem US House Rep. Filemon Vela To Trump: You Can Take Your Racist Border Wall And Shove It Up Your Ass

A Hispanic House Democrat who represents a Texas district bordering Mexico tore into Donald Trump’s attacks on a Mexican-American judge, calling them blatantly racist. Rep. Filemon Vela didn’t mince words in a lengthy open letter to the presumptive GOP presidential nominee on Monday. “Mr. Trump, you’re a racist and you can take your border wall and shove it up your ass,” Vela wrote.

Vela begins the letter noting that he agrees with Trump that Mexico should do more to deter violence from drug cartels and that felons in the U.S. illegally should be deported. But he then excoriates the real estate mogul over his rhetoric about Hispanics, including Trump’s assertion that an American-born federal judge of Mexican descent won’t be impartial in a lawsuit against Trump University.

Previous Nutjob Dilbert Cartoonist Scott Adams: I’m Endorsing Hillary Because I Might Be Assassinated If I Don’t
Next Bernie Sanders Bristles After Reporter Asks Whether It’s “Sexist” For Him To Keep Battling Hillary [VIDEO]