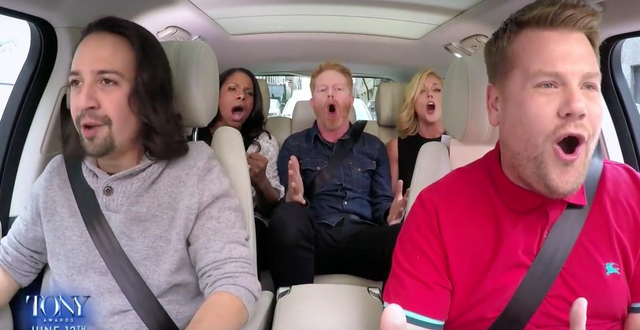 On Monday night, James Corden hosted a special Tony Awards edition of “Carpool Karaoke” to drum up hype for the show, which he’ll be hosting on CBS the night of June 12. And of course, he had to have Pulitzer Prize-winning, MacArthur Genius Grant-receiving Lin-Manuel Miranda on, whose musical Hamilton set a Tonys record this year with 16 nominations. The likeable pair opened with a medley of “Alexander Hamilton” and “Guns and Ships” from the Hamilton soundtrack, with Corden showing off some impressive rapping skills, before picking up a trio of Broadway stars: the legendary Audra McDonald, Jesse Tyler Ferguson, and Jane Krakowski.

Stick around for their take on One Day More from Les Miserables. That last note from Audra!